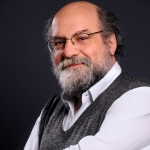 Demi Getschko holds BSc, MSc, and PhD, degrees in Electronic Engineering from the University of Sao Paulo in Brazil. He is an advisor to the Brazilian Internet Steering Committee (CGI.br), CEO of the Brazilian Network Information Center (NIC.br) and an Associate Professor at the Pontifical Catholic University of São Paulo (PUC-SP). He was a member of the Board of Directors of the Internet Corporation for Assigned Names and Numbers (ICANN) by the Country Code Names Supporting Organization (ccNSO).
In April 2014 he was an inductee at the Internet Hall of Fame under the category "Global Connectors", in a ceremony held in Hong Kong. In July of the same year, he was awarded with the “Cristina Tavares" prize of the Brazilian Computer Society. In December, on the day of the Engineer, he received from the Engineers' Union, in the State of São Paulo, the "Personality of Technology 2014" award, under the category "Internet." In May 2016 he was admitted to the Order of Merit of Communications, at the "Officer's Degree" as a form of recognition of his services to Communications.